No woman has ever been pregnant forever, right? Right???

No woman has ever been pregnant forever, right? Right??? 'Cause I've reached the phase where I'm pretty sure I'll be the first. I'm just too darn comfortable—there needs to be more pain!


Anyway, we had yet another Monday (day off for Eli) to fill up without a new baby. We have a zoo pass that we haven't used much yet so when we woke up yesterday I suggested that as the activity for the day. This time we brought my youngest brother along as our free guest. As we drove off prepared to spend the whole day away, we were both hoping our plans would get interrupted.

We've been to the zoo three times now in a relatively short amount of time and I would think it would begin to feel as though there's nothing new to see. But each experience has been quite different. 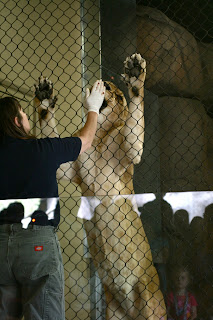 We got to see two presentations: one at the big arena displayed a porcupine, a boa constrictor, three tropical birds of a variety I've forgotten, and two vibrant parrots live on the stage and the other showed us the type of training they do with the lions to keep their minds active. This second demonstration actually answered a question I've long had about animals at the zoo. To me they always look so bored and I've wondered why they don't put sheep or bunnies or something into their cages to let them hunt down their own lunch. It would give them something to do and I think it would be fascinating to watch! Well, that doesn't seem to be acceptable zoo practice, but they too are concerned about keeping these animals active, even though they get everything they need handed to them on a silver platter. It was amazing to be that close and to see the power and energy in every muscle as that female lion paced back and forth responding to commands. 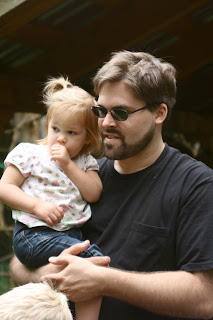 Then we went home, ate dinner, cleaned up, put the kids to bed, watched The Business of Being Born (streaming on Netflix), went to bed ourselves and slept altogether too soundly.
Posted by Amanda Evans at 11:06 AM 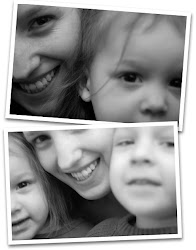 The great thing, if one can, is to stop regarding all the unpleasant things as interruptions of one’s “own” or “real” life. The truth is of course that what one calls the interruptions are precisely one’s real life—the life God is sending one day by day; what one calls ones’ ’‘real life” is a phantom of one’s own imagination.
–C.S. Lewis .